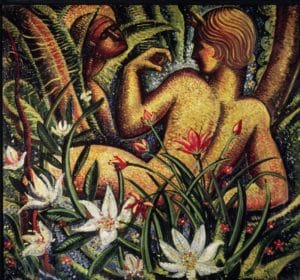 The Exotic Realms of Jules André Smith  explores Smith’s extensive body of work, including paintings, watercolors, sculptures, concrete reliefs, theatre set designs, architectural drawings and architectural ornamentation. Through this exhibition, we hope to understand more about his 1937-1942 designs for the Research Studio, which he called “Espero,” or Hope. Awarded the National Historic Landmark distinction for being one of the last remaining examples of Mayan Revival architecture in the southeastern United States, the Center features hundreds of relief carvings depicting Christian and Pagan gods and figures from a variety of religions and cultures. Exotic Realms invites you to step into these fantastical worlds, and learn more about the man who created them.