Palm Coast-based artists Richlin Burnett-Ryan and Weldon Ryan are both featured in “Love & Compassion: Images of Mother and Child,” the Maitland Art Center’s Spring 2021 exhibition. Join the couple at this virtual artist’s talk, held over Zoom, as they dive into the inspirations for their works, their background, and their ties to the theme of Mother and Child. Weldon Ryan will focus specifically on his portraiture techniques during this talk. 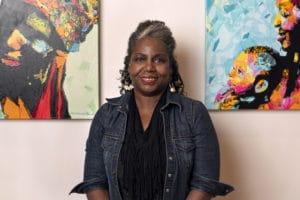 Richlin Burnett-Ryan was born in Guyana and moved to Brooklyn, New York as a child. She studied graphic design at the Rochester Institute of Technology and at the School of Visual Arts in New York City. Together with her husband, Weldon Ryan, she started a small graphic design business and also worked as an art director until the couple and their children relocated to Palm Coast, Florida in 2004. Burnett-Ryan saw this move as the perfect time to focus on her art. Since moving to Florida, Burnett-Ryan continues to work as a graphic designer and artist, and she serves as an Exhibition Curator at Bethune-Cookman University. 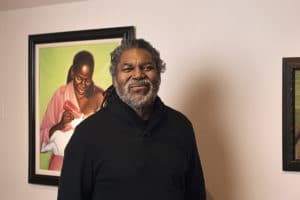 Weldon Ryan came to the US from Trinidad and Tobago as a child, growing up in the Bronx. He studied art at SUNY New Paltz and the Fashion Institute of New York, and in 1989 he joined the NYPD, becoming the first African-American appointed to the Composite Artist Unit. During this time, he continued to paint at his studio in DUMBO, Brooklyn, creating commercial illustrations for magazines. Ryan retired from the NYPD in 2004 and relocated his family to Palm Coast, Florida, where he and his wife Richlin decided to dedicate more time to their artistic pursuits. In 2011, Ryan was awarded the title of Flagler County Artist of the Year.