A letter from André Smith to his mother when he was stationed overseas during WWI:

On your blue envelope addressed to me cross out the word “Engineer Reserve Corps”.  It will shorten the delivery to me. 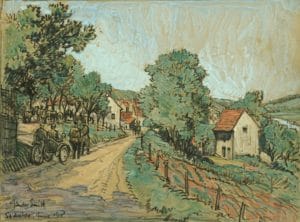 A Billet Village on the Marne, by J. Andre Smith

This is a lovely day with the first sunshine that we have seen for days.  The wet misty and rainy weather is with us again and especially this town which is in a saucer of low hills is given to degree of dampness that beats anything that I have known. At night a white mist rises from the meadows and drifts over the town and although this has its advantages in the fact that it acts as a shroud that conceals us from the night-flying hun it is nevertheless chilling and generally unpleasant. And so when the sun does come through, if only for a few hours (it is clouding again now) we welcome it with a warm heart and glad smiles.  If the weather holds and even if it doesn’t  I am planning a hike this afternoon to a village which I have passed many a time in a motor but which my strict conscience would allow me to stop and visit.  Like most of the villages here it is located in a fold of the hills, it is built along the edge of a stream and with the church on the high land and overlooking the whole clustering of houses.  The church is different from any that I have seen because of its tower which is surmounted by a huge figure of the Virgin or a saint, I have never been near enough to tell which.  But this afternoon I shall start out right after lunch on a good old-time peace sightseeing walk.

Only I wish that I had someone to join me.  My fellow artists are too old or too lazy or too something to enjoy a hike and I have long ago given up the idea of interesting them in this form of exercise and recreation.  And besides, the ones that I would enjoy walking with are either sick or about to be sick. Poor Peixotto is in bed for the second time in two weeks; first he had a very bad throat and now it is his heart.  The other evening after supper he fainted just as I got to him, the front door of the club and although he recovered quickly and felt well the next day he again had a return of the trouble on the following morning. He was in such a bad way that I was frightfully worried about him and put him at once under a doctor’s care. Since then he has improved rapidly and by the middle of next week he is planning a two weeks’ vacation to his home at Samois where he can be with his wife and get a rest from the close association of his “fellow comedians” (as Duncan calls us).  The criticism of our work (from Washington) has given him a good deal more worry that it has the rest of us; while it has put him into a sort of nervous sate it has merely made us mad.

In addition to this has been the petty misunderstandings among our group which I confess have been thoroughly irritating and enough to get on to anyone’s nerves and especially on the nerves of one with Peixotto’s gentle disposition.  I think a rest will put him back in to shape and then after that he and I will probably move into Paris and thus get away from the wrangling gang.

The Spanish Floo which you mention in your letter which I have just received (written from 411) is also busy all over Europe and England.  This town has not escaped either and almost everyone is more or less affected by it, either that or they are trying to dodge it in its full force.  I left Duncan huddled before a fire this morning complaining of a cold and a fevered sleep and the rest of our artistic gang are either low in their minds or sniffling on the edge of a cold.  For my part I have so far managed to escape the epidemic by an occasional aspirin tablet and by keeping to a system of out-door walking so as to keep my blood stirring.  But here the misery of the sickness is made worse by the weather and lack of sunshine and the damp coldness and so those who fall victim to it get mighty low in their minds, as you can imagine.  But except for a few aches and quakes which I attribute to the dampness, I am feeling first rate and I am making it my business to see that I remain so as far as I am able to govern such matters.


At last from Washington comes a ray of understanding which promises at least a step toward a better understanding of our work.  Slowly it is dawning upon some of the officers who are judging our work (by what authority I do not know) that our drawings are being done for a real purpose aside from their possible use in magazines.  I have worked hard and much of my time has been taken up in fighting this narrow point of view in regard to our work over here and I hope that before long things will be definitely adjusted so that we can go alone without these disconcerting interruptions and criticisms.  It seems utterly absurd that this should have come up at all and it is still a mystery to me to know how and why the wide field of work upon which we started out should have been forced into such narrow confines and limitations.  But I think that an understanding is now underway and after this we will be left undisturbed.  I hope so anyway.

Perhaps another month here and two or three more trips out to the fronts will finish my work for the summer and I will pack up and move to Paris.  I was told that we would be allowed studios requisitioned by the government and Peixotto and I are talking of getting a small apartment somewhere.  Mrs. Peixotto has in mind a French woman who would be willing to attend to our wants and needs in the nature of a general housekeeper, cook and chamber maid and if we can get her and find a place that isn’t too expensive the problem of living in an expensive, war-priced Paris will be nicely solved.


I don’t know what the rest of the artists will do and what is more I really don’t care.  I shall, of course, miss Morgan and Duncan but as to the others I am quite frank to say that a separation from them will be a positive treat. But I think when the cold weather sets in (and it can be frightfully cold in this part of France) I shouldn’t be at all surprised to have them filter in to Paris one by one.  But like in New York we will be safe against the invasion by the bigness of the town and so we will be free from the close and intimate association which been responsible for the breeding of contempt.

From now on our day-light working days will grow shorter and shorter; even now on gray days (and most of them are gray) the light fades at four o’clock and at 4:30 it is really too dark to see.  That leaves from two and half to three hours of darkness before dinner with nothing to do.  I have taken to walking but I must admit that even my enthusiasm for this form of exercise is dying under the conditions of darkness and wetness and muddiness which these “afternoon” strolls must now be taken.  Imagine walking country roads so dark that an electric flash is necessary now and then to save you from puddles and ditches and that too at 5:30 in the afternoon!  In the town the streets are so black that one has to walk about more by instinct that sight.  Black humans loom suddenly in front of you and you escape a crash with them only by a quick sidestep which just as likely will plant you in the path of some other prowler of the dark.

Electric flashes are fashionable but not always reliable unless you keep burning all the time and that is rank extravagance.  Turn it on and off intermittently and you are just as apt to plunge into a passerby either because you did not see him while your light was on or he did not see you when your light was off.  Anyway you put it, every walk through the streets is an adventure and is punctuated by apologies and curses.  And so when you write me that New York is dark at nights I can’t help but smile and wonder just what you mean by “dark”.  Probably just about one-fifth as dark as Paris is “dark”.  In Paris the autos are allowed their headlights, or small lamps (not the road lights) and some of the blue-dipped street lamps are wearing out to a dirty yellow and so the City is almost bright and gay with its illumination. But here there are no street lamps and every window shutter is drawn and except for the twinkle of individual flashlights the darkness is complete.

And all the time the peace-notes go back and forth and we are kept wondering if there is to be an end to this whole mess before long or whether all the overtures from the Boche are only a new form of the old and annual autumn peace-move.  I have given up trying to get at the bottom of it.  First it looks to me like a complete German surrender and the next minute I see in it only another trap and a continuation of the fight more bitter than ever.  And then I learn of some friend that has been killed and I am torn by two impulses, one to end it so we can save the rest of my friends and the other to continue it so as to revenge those who have had to pay with their lives.

I was particularly shocked to hear of the death of my old Delta U friend Bill Baldwin.  He was killed in action while leading his company against a nest of machine gunners is Chateau Thierry.  Of my Plattsburg company mates I have learned of the death of one man and I am very sure that there are several others that have been either killed or badly wounded.  The regiment in which most of them were officers has seen some of the most desperate fighting that any of our troops have encountered and from what I hear they have been pretty well shot up.  I suppose I shall never know the full toll until it is all over.  Let us hope things will end soon providing they end right.


Lunch time and I must stop.  I sure would like to turn around and find myself in my New  York studio so that I could take off that inky blouse of mine and three minutes put the latchkey in at the door of our flip and whistle to you and ask if lunch is ready.  And then I would grow just as sleepy as ever during the meal and fall in to my bed for a snooze the moment I had my tummy full.  Well, some day before very much longer—–eh what?

Here’s my love to all of you,
Andre 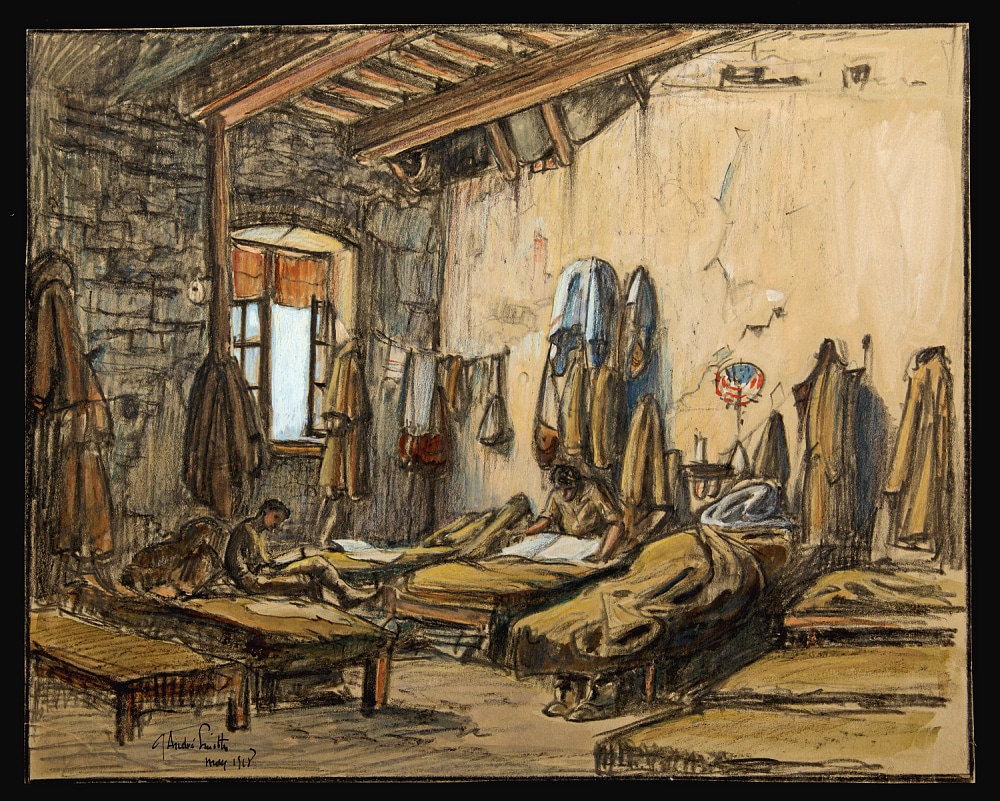 A Cell in the Monastery at Rangeval, by J. André Smith

A Field Hospital on the Road to Château-Thierry, by J. Andre Smith